REND LAKE COLLEGE, INA, Ill. (Sept. 14, 2012) – The Illinois Workforce Investment Board meeting Thursday at Rend Lake College featured more than 30 leaders in the public and private sectors talking about the state’s economy and workforce initiatives, as well as goals to network businesses, employer associations, education partners, and other stakeholders. 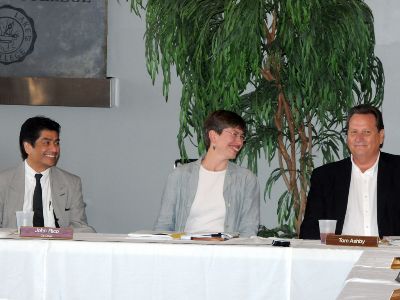 The Illinois Workforce Investment Board welcomed Illinois Lt. Gov. Sheila Simon as its guest Thursday during the board's meeting held at Rend Lake College. The meeting featured more than 30 leaders in the public and private sectors talking about the state's economy and workforce initiatives, as well as goals to network businesses, employer associations, education partners, and other stakeholders. Pictured above are, FROM LEFT, IWIB Co-Chair John Rico, Lt. Gov. Simon and Centralia Mayor Tom Ashby, co-chairman of the IWIB. Click on the image for a larger version.
Board members welcomed Illinois Lt. Gov. Sheila Simon as a guest. RLC President Terry Wilkerson thanked the board for coming and invited those in attendance to tour the campus after the meeting.
“We really value the relationships we have with area employers,” said Wilkerson. “The college is privileged to be the setting where so many representatives from the public and private sector come together to learn about the status of Illinois’ workforce and economy, and plan measures for growth. Rend Lake College is eager and well-positioned to do its part to help them reach those goals.”
Centralia Mayor Tom Ashby is the current chairman of the IWIB and has been a member for more than a decade. He helped put Thursday’s meeting together at RLC. According to Ashby, it was one of the best turnouts for an IWIB meeting since he joined.
“This was the first Southern Illinois meeting in quite a few years for the board,” Ashby said. “I thank the college, its board and President Terry Wilkerson for the opportunity to hold it at Rend Lake College, and I commend them for addressing emerging training needs in southern Illinois.”
The IWIB is made up of representatives from universities, colleges, high schools, government agencies, private companies and more. Some of the employers represented Thursday at the college included UPS, John Deere, Caterpillar and Kraft Foods. State agencies represented included the Illinois Department of Commerce and Economic Opportunity, with Director David Vaught and his staff at the table, and the Illinois Department of Labor, with Director Joe Costigan and his staff participating.
“We are a board that develops training programs to strengthen the state of Illinois’ workforce system and economic development,” Ashby explained. “We have many different partnerships in the public and private sectors.”
One IWIB program Ashby mentioned is the Illinois Critical Skill Shortages Initiative designed to align region workforce strategies with economic development to provide qualified workers for critical skill shortage occupations. Key sectors being targeted are healthcare, manufacturing, and transportation/warehousing/logistics. Ashby said agriculture is also being added to the initiative.
He said the program strives to identify good-paying occupations that suffer skill shortages, look into the causes that lead to these shortages, and redirect existing resources to address those issues.
“One thing we’ve been working on is reintroducing vocational aspects into the regular curriculum at grade schools, high schools and community colleges,” Ashby said. “... We don’t have a shortage of jobs in Illinois. We have a shortage of skilled workers. ... We want to use the data we have to place training in the right areas – where it’s needed. ... Community colleges make sure workers learn the proper skills required by business and industry. Continental Tire and Rend Lake College are a perfect example of that.”
Ashby said plans for more efficient use of funding to make training initiatives more cost-effective are encouraging.
“We feel the cornerstone is the public-private partnership,” he said.