MT. VERNON, IL (Dec. 7, 2021) – The Rend Lake College Foundation showed Thursday night that the present and future shines bright for the college, its graduates and those who continue to support the efforts

The 42nd Annual Dinner was hosted at the DoubleTree Hotel in Mt. Vernon. With the theme “Shine Bright: Lighting the Way Today & Into The Future,” the evening celebrated how much of an impact RLC has had on some of its past alumni and the generous spirit that has continued to make the college a bright spot in Southern Illinois.

“This year’s event was very special since we haven’t been able to publicly celebrate the generosity that supports Rend Lake College for the past two years,” RLCF Chief Executive Officer Kay Zibby-Damron said. "During one of the most challenging times in education, the incredible outpouring of gifts and support from our alumni, friends and community businesses has been amazing, and for that we are very grateful.”

Alumnus of the Year -- Clint McDonnough 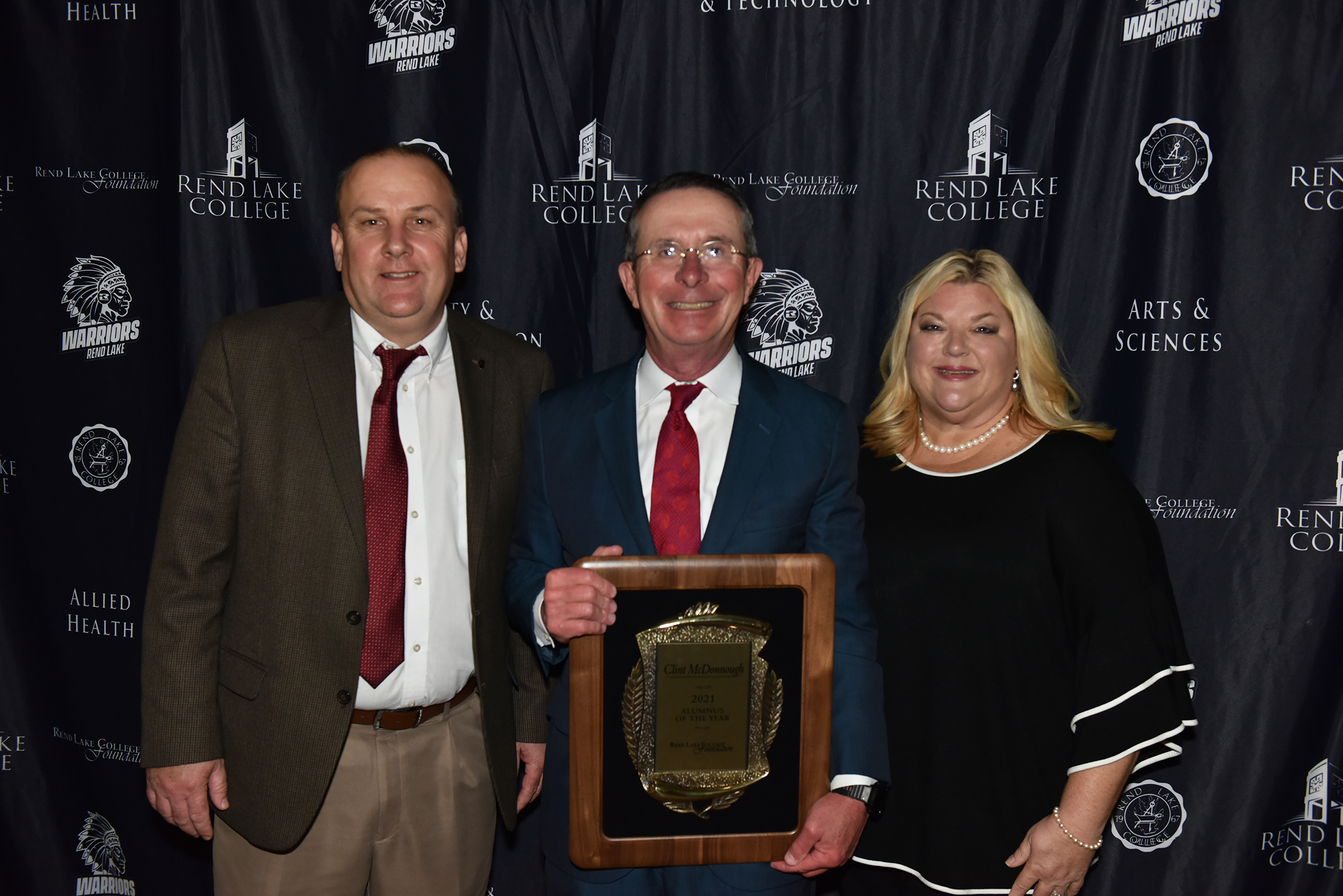 Clint McDonnough was recognized for being an advocate for education as he joined the ranks of RLC lore as the 2021 Foundation Alumnus of the Year.

“With my commitment and passion for education and around the importance of community colleges, this means a lot to me,” McDonnough said.

McDonnough, a 1973 graduate of Rend Lake College and a native of Pinckneyville, earned his Associate in Arts degree and then transferred to Southern Illinois University Carbondale to complete an accounting degree. McDonnough ultimately served as a managing partner at Ernest & Young LLP until he retired in 2015.

Throughout his career, and even now into his retirement, McConnough strives to make a difference in the community through various efforts with charitable and educational organizations because he believes in working to pay forward the benefits of his circumstance. He has been involved with the United Way as a campaign chair and the Dallas Chamber, where he helped schools in need attract the best school administration candidates.

McDonnough spoke about his formidable years at RLC and how the early days shaped his belief in the importance of education. 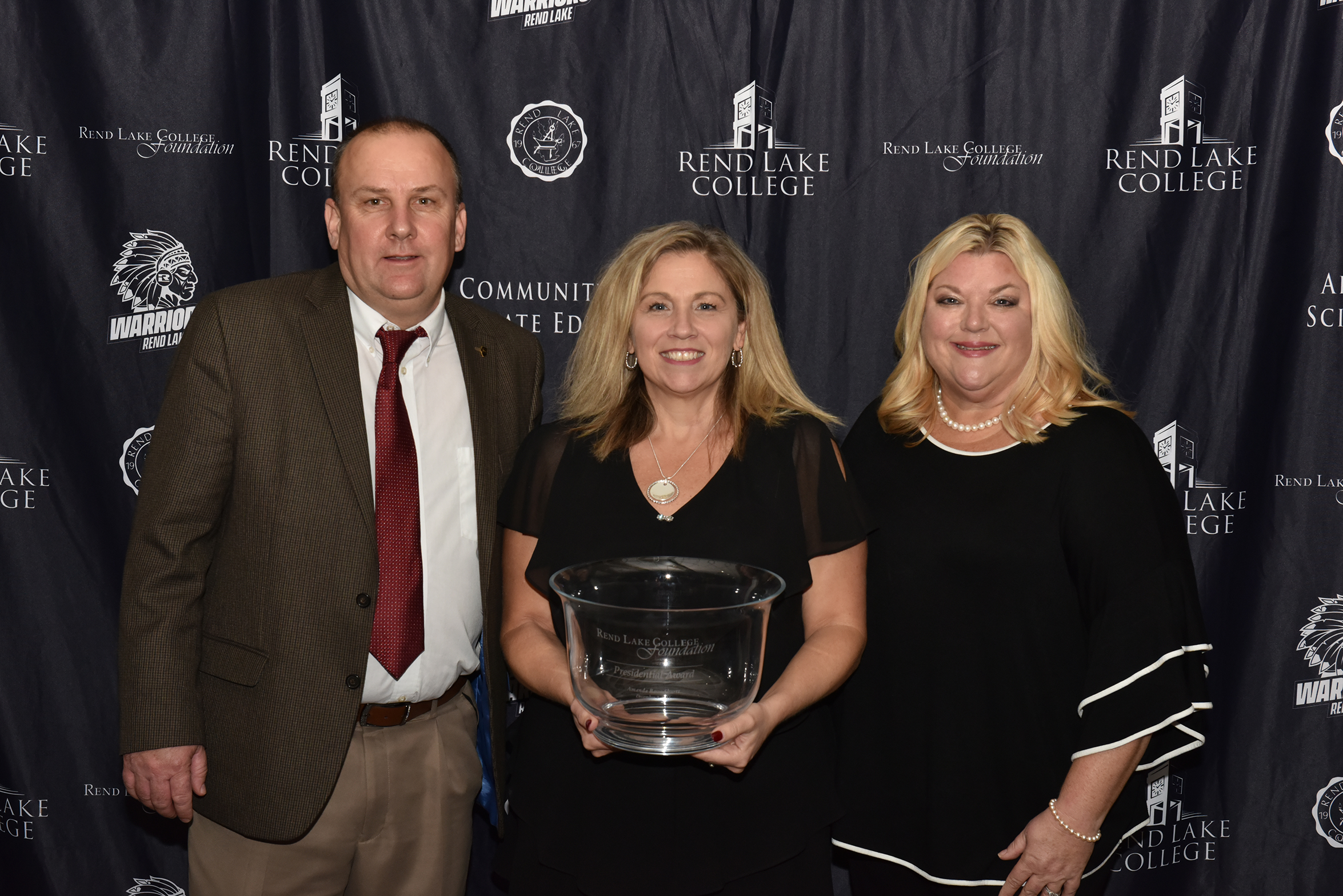 The evening also honored Amanda Basso-Shurtz as the 2021 Presidential Award recipient. Basso-Shurtz, a native from Sesser, started her career in healthcare by enrolling in the Licensed Practical Nursing program at RLC. She would later pursue her registered nursing license as well as her master’s degrees in nursing and business, both from McKendree University.

Basso-Shurtz was named the chief executive officer for Crossroads Community Hospital in 2017, a position she held until April 2021. She now works as the Regional CEO at Ascension Wisconsin Neighborhood Hospitals.

“I will be forever grateful for the career path I've been on and the journey I've been able to do. It all started with trying to be a nurse at Rend Lake,” Basso-Shurtz said. “Thank you for this award. It means so much to me.” 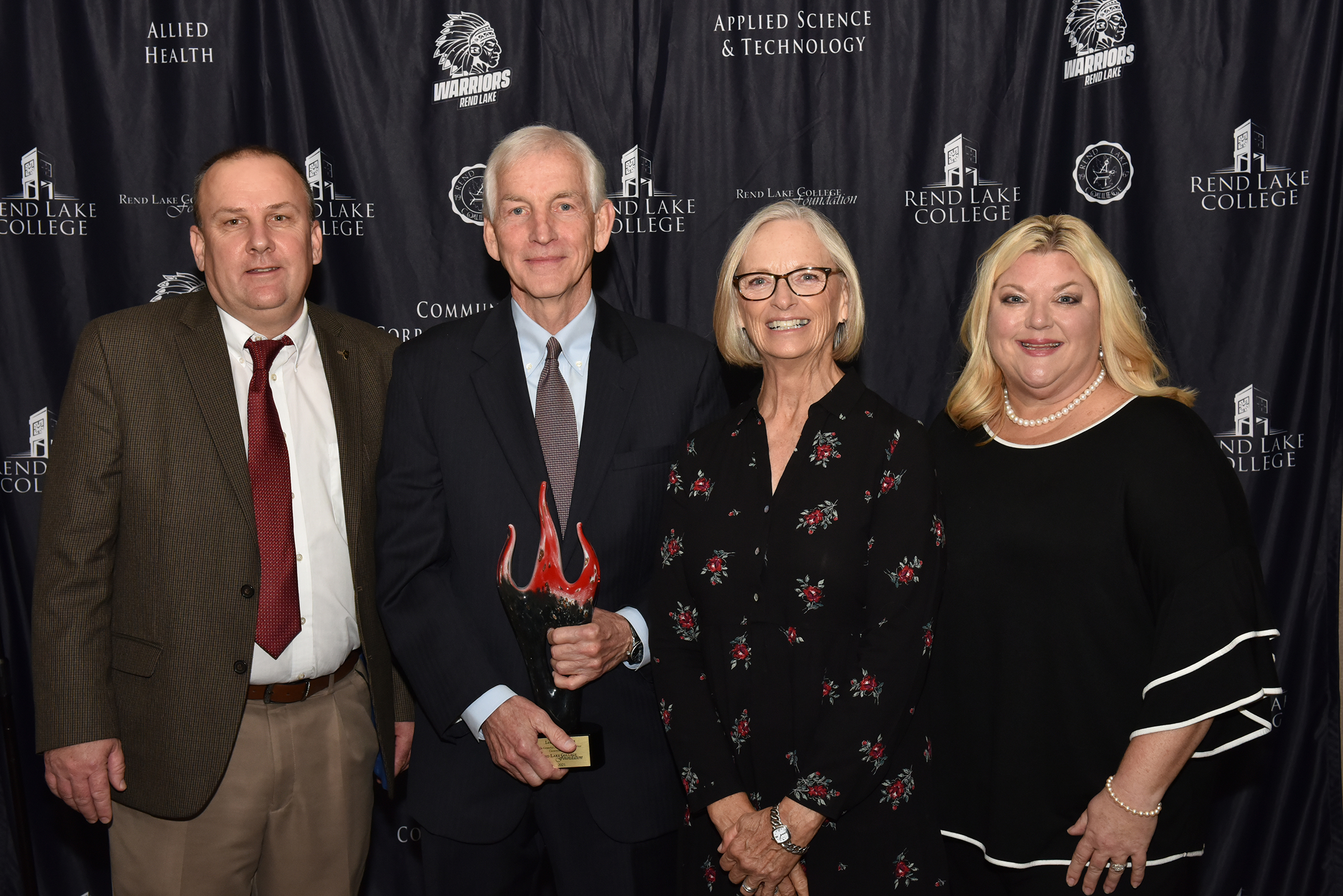 Lee and Jaci Wyatt met as RLC students in 1971 and have been together for 45 years. In February 2020, the couple set up an endowment fund for several Foundation scholarships in memory of RLC coaches Jim Waugh and Mick McClure and in honor of Coach Wayne Arnold. Zibby-Damron said in her speech that because of their generosity, awards can be given to support student-athletes at RLC for generations to come.

“This award is given to them to remember where their journey began and for their generosity in wanting to make a difference at Rend Lake College,” she said.

In their acceptance speech, Lee Wyatt said any gift that could have been given back to the college is small compared to what RLC has done for them.

“We often say that the Lord has blessed us in certain ways,” Lee Wyatt said. “We were very thankful and appreciative of this award but it’s nothing compared to what Rend Lake has given us.”

During the previous RLFC Annual Dinner (2020 was canceled due to COVID restrictions), it was announced that a new campaign was underway to renovate the Learning Resource Center. The ambitious $500,000 project included expanding the floor space, creating six study rooms, building an outdoor study area and transforming the Career and Technical Education Success Center and CTE Computer Lab. A Children’s Library and a Wellness Room were also built in the renovation process.

In the time between both annual dinners, the LRC project has been completed and renamed in honor of the late George and Mary Slankard’s lead gift that sparked the successful campaign. The evening recognized the major donors of the project and presented them with a gift during the program.