The presentation highlighted the agreements made between both institutions that have fostered a creative sharing partnership in programs and services. The pair also told attendees about the challenges that face partnerships and how to overcome them.

“We have been exploring and expanding this partnership for more than six years now. The benefits are both financially efficient and expansive in the opportunities that we can offer to our communities and students…which ultimately is who we are working to serve,” said RLC President Terry Wilkerson. 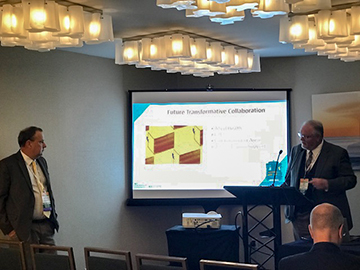 The two colleges recognized many years ago that working together rather than competing against one another is vital to serving Southern Illinois students and also managing precious taxpayer funds. The colleges collaborate at multiple levels as they transform each institution as co-providers for programs as well as services.

“This partnership agreement makes common sense and exists for the common good of students,” said SIC President Dr. Jonah Rice.  “It is a relationship that is based on trust and data.”

The two colleges have shared academics with each other like Spanish and multiple general education courses. Career programs also have been shared such as Nursing and Criminal Justice.

One of the more assertive partnerships is the sharing of the Veterinary Assistant program held between the two main campuses at SIC’s David L. Stanley Center in Carmi. The two partnered on Massage Therapy last fall at the Carmi Center, and have been partnering for the veterinary assistant program for three years. 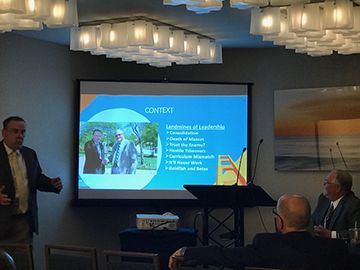 Rend Lake College President Terry Wilkerson, left, highlights the initiatives that have come from his partnership with Southeastern Illinois Community College. SIC President Dr. Jonah Rice, told the group how the collaboration allows smaller institutions to better serve their students and their districts.

“Sharing resources as well as programs will be the major path to sustainability in higher education in the future,” said Rice.  “Smaller colleges can’t be all things to all people without partnerships that are economically sound.”

The two colleges plan on more sharing in the near future, such as with a possible new allied health program and new venues in career technical education.

As partners, the two colleges are the largest community college in the southernmost region, and they actually have a combined freshman class that puts them on par with Southern Illinois University Carbondale. 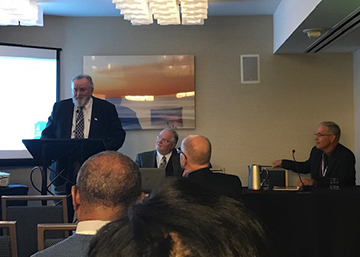 Joining the RLC and SIC presidents were representatives from both institutions’ Board of Trustees. SIC Trustee Jim Ellis, left, speaks and Dr. Rice, center, looks on. RLC Trustee John Kabat, right, also attended the ACCT Leadership Congress and spoke on the benefits of cooperation between institutions.

“We can’t have just one location to serve students, but having two for the price of one—now that’s a deal for all our students,” said Rice.