RLC Science Grad helping to save endangered species with NOAA

Kroetz said RLC’s location and the ability to take care of her generals were what brought her to the college at first.

“I wasn’t quite ready to head off to a four year university right after high school and Rend Lake College was a perfect fit: it was close to home and offered first and second year courses that I needed,” she explained.

But, there was one class that really resonated with Kroetz and tapped into the love of animals and marine life she developed in high school.

“There was a tropical marine field course that I took as an extension to a biology course that taught marine science at a field station in Jamaica,” she said.

“It was held at the Hofstra Marine Lab in Jamaica. This was the first time that I was able to see first-hand what it would be like to be a marine scientist. Through that class, I was able to design, conduct, and analyze the results of my own experiment. In addition, I learned the local marine life, both flora and fauna, and learned about the local fishing community.” 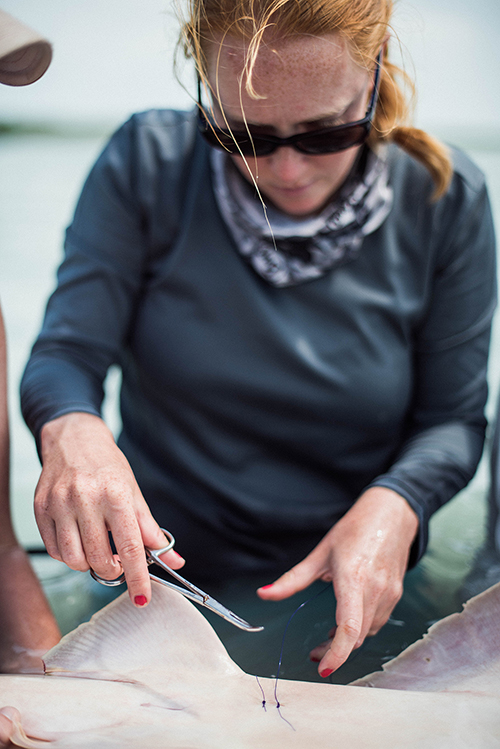 Dr. Andrea Kroetz internal acoustic tag in a smalltooth sawfish. All research activities conducted under guidelines ESA 17787 and EVER-2017-SCI-0022. Click on the image for a larger view.

It was during her doctoral work that Kroetz really developed a passion for elasmobrancii, the group of fish comprised of sharks, rays and skates. From there, she narrowed her work down ever further to focus on smalltooth sawfish.

“The smalltooth sawfish population has likely declined by up to 95 percent since the turn of the last century and the status of the US population is currently unknown. Researchers have been working to gather as much information about this species as possible including habitat use, movement patterns, diet, reproduction, age and growth, genetic diversity, etc. The more information that we have on this species will better inform fisheries managers and lead conservation efforts to aid in the recovery of this species,” Kroetz stated.

“One of my dissertation committee members works for the National Oceanic and Atmospheric Administration (NOAA) National Marine Fisheries Service and mentioned that he was working on some projects involving sawfish and asked if I was interested.

“These animals are amazing creatures, and I wanted to be a part of research that would help conserve and recover this species. My committee member and I developed a research proposal and I submitted it along with my application to the National Academies of Sciences-National Research Council. After going through the peer review process, my proposal was selected to be funded. I moved to Panama City, Fla. shortly after finishing my Ph.D. to begin my post-doctoral fellowship researching sawfish.”

Kroetz’s days are split between lab and field work. On a typical research field day, she might spend between 10 to 12 hours working on collecting samples from juvenile smalltooth sawfish.

The team collects the sawfish through a specially approved method, taking extra care given the endangered status of the species. After they catch the sawfish, they take a number of measurements, count their teeth, collect a small genetic sample, tag the animal and then release it back into the wild, studiously documenting and photographing the entire process. 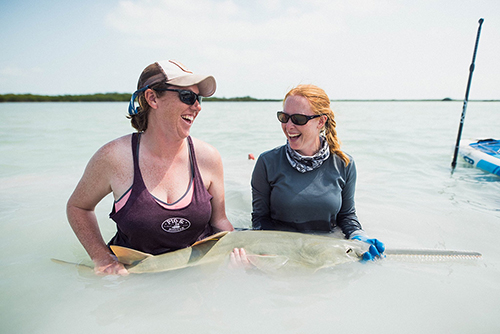 Dr. Andrea Kroetz, right, and a college display a smalltooth sawfish in the wild. All research activities conducted under guidelines ESA 17787 and EVER-2017-SCI-0022. Click on the image for a larger view.

In the lab, Kroetz maintains the data collected in the field. She also writes code to analyze the data and writes manuscripts for peer review as well as a number of other tasks.

To her knowledge, Kroetz was part of the team that placed the first-ever internal acoustic tag in a smalltooth sawfish, and she performed the surgery.

“It was amazing and nerve-wracking. To have such responsibility in your hands can be stressful and a high at the same time. The surgery went very well and we have been detecting her on our listening stations ever since,” she expressed.

Just this past December, Kroetz was part of another monumental first. During an expedition in Andros, The Bahamas, the team caught a mature female smalltooth sawfish. Kroetz and her colleagues were the first to ever witness the live birth of five sawfish pups in the wild.

“It was absolutely incredible. The data that we collected on the mother and pups greatly advanced our knowledge about smalltooth sawfish life history. Not to mention that we confirmed that smalltooth sawfish pup in the Bahamas. This footage just aired on Shark Week on the Discovery Channel.” 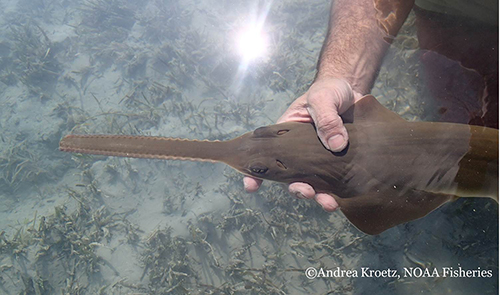 This is a picture of the smalltooth sawfish pup Dr. Kroetz witnessed being born and was featured during Shark Week on the Discovery Channel. All research activities conducted under guidelines ESA 17787 and EVER-2017-SCI-0022. Click on the image for a larger view.

Kroetz urged anyone who is interested in going into a science field, particularly those going into field-based or research related disciplines, to take as many science and statistic classes as they can. But another major component is getting hands-on experience via volunteering, interning and finding other ways to immerse into the discipline.

And, on a final, sawfish-related note, Kroetz says that populations are slowly starting to bounce back. So, if anyone happens to be on vacation and sees a smalltooth sawfish to contact the Florida Fish and Wildlife Conservation Commission.