Both Deichman and Page are Rend Lake College graduates, studying Criminal Justice before becoming fixtures in the place they grew up, putting on the uniform and vowing to serve and protect.

“It’s a profession that has treated me very well. I can’t describe how proud I am to serve in my hometown. I know these folks. I’ve lived here almost my entire life. For 47 of my 48 years, I’ve been right here. In fact, I grew up two blocks north of the police department. It’s always been a privilege to serve here,” Deichman expressed.

Chief Deichman graduated from RLC’s Criminal Justice Program in 1988 under Ed Heischmidt, a long-time RLC Criminal Justice professor. Deichman reminisced that he always carried a special comradery with many of his classmates and was lucky enough to work with them after he moved back to the area.

For his part, Page graduated from the RLC Criminal Justice Program in 1994.

He began working locally from a young age, being a teenager employed at Eastside Lumber in Mt. Vernon. His decision to go to Rend Lake College allowed him to keep that job all through school. After earning his associate degree, Page went to the Jefferson County Sheriff’s Department as a dispatcher before finding himself as an officer with the Mt. Vernon Police Department in 1997.

Page did go on to earn his bachelor’s degree after having spent some time on the force, graduating from Greenville College.

“Law enforcement was always what I wanted to do. My father was a fireman. So, growing up, it was really between being a fireman or police officer. Law enforcement felt right to me, so that’s what I ended up working towards. In addition to studying it, I did a couple of internships. I worked part-time for the sheriff’s department. That led to my first full-time job with the sheriff’s department, and then with the city.”

Page also carried the desire to stay in his hometown to make a difference.

Those ties to the community have helped keep the bond strong between the officers and those they serve. In fact, as the candidate pool thins, both men have placed a strong emphasis on trying to find potential employees who have a connection with Southern Illinois.

Deichman joined the Mt. Vernon Police Department in 1989. He said that some of his most fun on the force came when he joined the K-9 Division in 1994. During his time in the K-9 unit, he was part of every major call.

“I guess I’m a bit of an adrenalin junky,” he joked. “I was able to get in on some high priority stuff.”

“We do a ton of outreach now to find those qualified candidates. One of our biggest priorities is getting a diverse workforce. When the chief and I took over in 2014, one of the first things we did was update our recruiting processes. We go to a lot more job fairs to get our name out there. We have the application up electronically on our website when we do testing. We also send them out to every community college that has a Criminal Justice Program south of Springfield.” 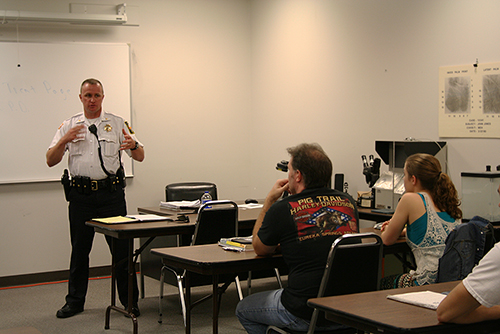 Mt. Vernon Assistant Chief of Police Trent Page takes time out of his schedule to speak to a Rend Lake College Criminal Justice Class. Click on the image for a larger view.

Deichman emphasized the point that many looking to break into the field are willing to leave the area to get their foot in the door. So, the Mt. Vernon Police Department is making a focused effort to be the place where local, qualified-candidates might find the entry point and hopefully continue to stay and serve.

“One of our biggest retention issues is keeping people here who aren’t from here. I mean, the reality is, when you’re looking for that first job in a field, you jump at the first opportunity that comes along. I know I did. You want to get your foot in the door. I did that. My first job was 500 miles away in Atlanta,” Deichman said.

“They were the first ones that offered me a job. So, I took it. Luckily, I got the opportunity to come back to my hometown and work here. So, I jumped at the chance. Now, Atlanta can afford to lose me, but when you get to these municipalities like Mt. Vernon, Centralia, Carbondale, West Frankfort, Benton, losing an officer or two can make a major impact.”

“Over the last few years we have really made an effort to focus on working with our community college partners. Most of the colleges in this region have been very receptive. Rend Lake College is no exception. Ron Meek [RLC Criminal Justice Associate Professor] has been great about letting us get in front of students to present. We are just really trying to generate some interest in our department to get some prospective employees, because the ones that are from here are more likely to stay here. And, at the end of the day, that’s a better investment for us as an employer.”

So, what do Deichman and Page look for in potential Mt. Vernon police officers?

“Anytime anyone serious about the profession can do internships or job shadowing, that’s going to make a huge impact. Getting some exposure to the profession is going to help really make up your mind if this is something you want to dedicate yourself to. I think Rend Lake does a very good job right now by brining officers into classrooms to talk to the students and give them an idea of what’s going on,” Page said.

As another key piece to the puzzle, both Deichman and Page stressed the importance of work ethic. The demanding field requires long hours and stressful situations. If a prospective officer displays lack of discipline or drive in a classroom setting, it can give potential employers pause.

“I can give all these common sense answers like ‘go get an education,’ but honestly, my biggest advice for anyone looking to get into the field or fresh on the force is simply treat the profession with the respect it deserves. Be the best you can be. It’s a family, so don’t do anything to tarnish it. It’s not going to be easy, but it can be incredibly rewarding,” Deichman added.

He elaborated that education is an important piece to the puzzle though, stressing that law enforcement is a career path and comes with many of the same educational requirements and trappings of many other professional avenues.

“The more education an applicant has, the better product they are going to be when they present themselves to a prospective agency. And, depending on what level of law enforcement you want to get into, it might be a requirement to go on and get that degree,” Deichman said.

The chief also stressed the importance of being prepared for the rigors of the profession.

“I mean, it’s hard,” he said with a sigh. “How do you tell someone to be ready to jump into a crisis? We are seeing new challenges now too. Not only are officers having to deal with the physical rigors of the job, but with social media now, and the things you read in the mainstream media, law enforcement finds itself getting a bad rap at times. But, I still think it’s one of the noblest professions on the face of the earth. There aren’t many professions outside of the military, fire and rescue and law enforcement that people go out and put their life on the line for a stranger’s safety,” he expressed.

The choice to stay local wasn’t the first thing in Deichman’s mind when he completed his education. He said fresh out of school he had aspirations to work at the state or federal level, but after taking that initial city position in Atlanta and then transitioning to the Mt. Vernon Police Department, he found satisfaction in working at the municipality level.

“Honestly, I got in here and had so much fun that I never looked back,” he said.