INA, Ill. (Aug. 2, 2016) – Last month, Sandy West, Rend Lake College Coordinator of Technical Services and Collection Management, was elected for a one-year term as president for the Illinois Heartland Library System (IHLS) board. She will serve as president for the 2017 fiscal year, unless reelected in the future.

West was elected by the IHLS Board of Directors at their regular meeting in July. She was initially seated as an Academic Library Representative for the IHLS in June of 2014 and was elected treasurer in July of 2015. In addition to her new position with IHLS, West also serves on the SHARE (Sharing Heartland’s Available Resources Equally) Bibliographic and Cataloging Standards Committee. 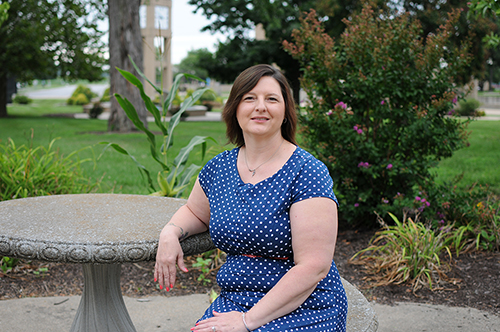 “It is an honor to serve as the president of the IHLS. It’s my third year serving on the board and it is my hope to continue as a board member during board election in early spring 2017 as an academic representative,” said West.

As president, West will oversee the monthly board meetings and work personally with the executive director of the IHLS, she said. She added that as a board, the IHLS will spend some time working around a cut in funding stemming from the state budget impasse while still providing delivery and resource sharing to all members.

“One of my biggest goals as president this year will be to prioritize the goals and objectives of the IHLS for our five-year plan. The work being done as president is to ensure the IHLS system runs efficiently and effectively to meet the goals established from the mission and vision of IHLS,” said West. “Working within the constraints of reduced state funding means much of the work set forth for IHLS staff and the board is to find ways to make streamlining operations, delivery, and resource sharing our biggest priorities.”

West has been employed full-time at RLC since September of 2001. She currently works in the Learning Resource Center and is responsible for collection development, cataloging, and processing materials for circulation. West holds a Bachelor’s Degree in Business and Leadership from Judson College.

Also elected as IHLS Board Officers are Sarah Isaacs of Illinois Early Intervention Clearinghouse of Champaign as vice president, Rachel Fuller of Rochester Community Unit School District of Rochester as secretary, and Tina Hubert of Six Mile Regional Library District in Granite City as treasurer. The officers nominating committee is chosen by fellow board members and the officers this year were selected unanimously.