The ceremony will begin on location at 9:30 a.m. Thursday, Aug. 11. Construction work began at the Children’s Center in March with the goal of opening for students in the Fall 2016 semester. RLCF CEO Kay Zibby-Damron said the goal is right on schedule. 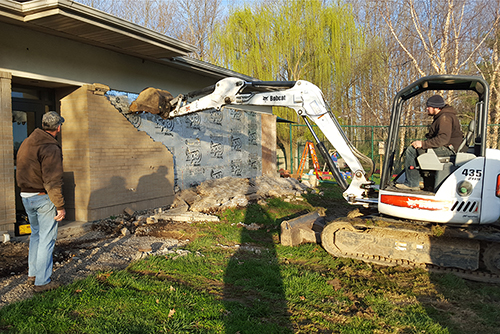 Groundbreaking on the addition began last spring on the Ina campus. The addition is located on the north side of the current RLC Foundation Children's Center. Click on the image for a larger view.
(Nathan Wheeler / RLC Public Information)

“The Foundation is extremely excited and eager to present this new addition to the campus and our community. The Skill Development Room will make a fantastic addition to the Children’s Center and will provide endless opportunities for growth for the children who use it every day,” said Zibby-Damron.

The Skill Development Room will include a gross motor room that will give students the chance to play indoors and have their own library on location. The project was spearheaded by two donations announced at the RLC Foundation’s Annual Dinner in December.

The first, a $195,000 anonymous donation, was presented by board member Rich Yunkus, who said then he was in disbelief upon hearing the story behind the donation.

“We’ve had an individual who wanted to make some donations to various charities, and instead decided to make a large donation to the Children’s Center for this addition to help young kids,” said Yunkus in December. 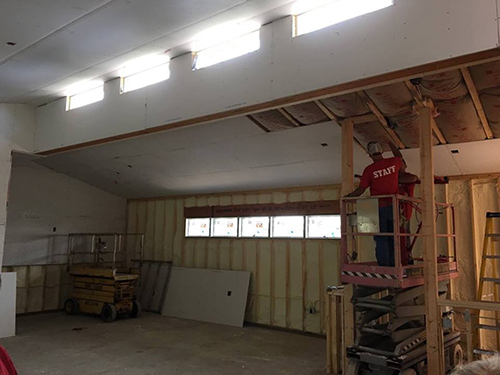 RLC Staff work to put up the walls and ceiling inside the addition earlier this month. Construction will be complete next month, just in time for children to use the facility during the fall semester. Click on the image for a larger view.
(RLC Foundation Photo)

Zibby-Damron said the donor wishes to remain anonymous for the time being, but a plaque in the donor’s honor will be posted in the new children’s library and displayed at the ribbon-cutting ceremony.

This contribution was added to a $100,000 donation from Marjorie Farrar in the fall of 2014 to completely fund the project. Farrar was one of the catalysts for the Children’s Center and made the lead donation of $100,000 in 1995 to start the process of building. There have been several other donors who contributed to the project.

Refreshments will follow the ribbon cutting ceremony. For more information, contact Elizabeth Oliver in the RLC Foundation at 618-437-5321, Ext. 1324 or [email protected].