INA, Ill. (July 19, 2016) – Rend Lake College continues to move up the ranks of top community colleges, according to a new study by SmartAsset, a personal finance technology company. The 2016 study released today on SmartAsset’s blog puts RLC in the number one slot, a bump up from number two in 2015 and number five in 2014.

The blog states, “Rend Lake College has moved up in the rankings since we conducted our 2015 study. Its student-teacher ratio remains low (15:1), and while its graduation and transfer rate fell slightly, at 67 percent, it’s still relatively high compared to the national average of 40 percent.”

To determine the top community colleges, SmartAsset used a set of metrics to analyze data from 565 two-year, public colleges across the country and ranked them based on four factors.

These factors include each school’s student to faculty ratio, where RLC sits at 15 to 1; cost of tuition and fees for in-state students during two semesters; graduation and transfer rate, which RLC boasts the second-highest on the top 10; and ratio of graduates’ median starting salaries to the overall cost of attendance.

Of the top 10, RLC also ranked second in salary-cost ratio at 1.33, meaning graduates have a starting salary that is 33 percent higher than their college costs.

“For the college to be acknowledged and honored by this study is a great testament to the continuous dedication by faculty and staff to our students,” said RLC President Terry Wilkerson. “Like RLC, this study focuses on student success, and we hope to continue doing everything we can to help our students.”

This year, RLC sits among other top colleges who made second and third appearances on the list, including Mitchell Technical Institute in South Dakota, Northern Oklahoma College in Oklahoma, and Fort Scott Community College in Kansas. RLC is the only college from Illinois to make the top 10 list since its inception in 2014.

To view the 2016 study, visit www.smartasset.com/student-loans/best-community-colleges-2016. Start your journey at Rend Lake College by visiting www.rlc.edu. 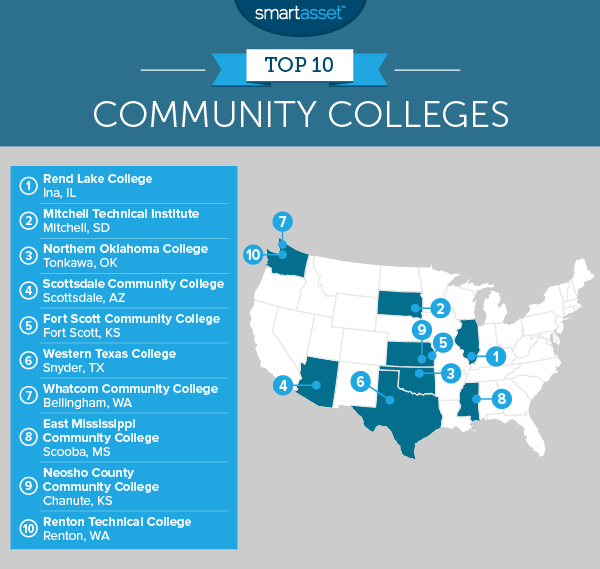