INA, Ill. (Sept. 1, 2015) – Rend Lake College has one of the top ten national speakers in its midst. Jesse Hinds of Bluford spent the spring and summer of 2015 rehearsing and perfecting a speech for the Cengage Learning Student Speech Video Contest, and was named as one of six honorary winners.

The 33-year-old history major said his persuasive speech focused on the efforts of Compassion International, a Christian organization that advocates to end spiritual, economic, social, and physical poverty for children around the world. Hinds and his wife Ann sponsor a child through the organization, and his speech encouraged others to do the same. 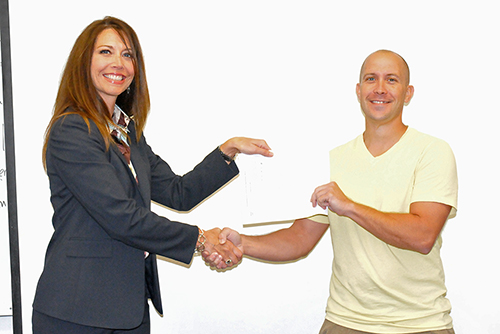 “I sponsor a child with my wife and it’s something I’ve become very passionate about,” explained Hinds. “I talk about it as much and as often as I can. An idea is not important unless you can communicate it.”

Every spring, Cengage Learning hosts the Student Speech Video Contest, wherein four students are named Grand Prize Winners and six are named Honorary Winners from across the country. Hinds and the other five honorary winners received a $250 award.

Hinds said public speaking is very important for students going into many different career paths, and is essential for his future career as an ordained minister. Currently, Hinds serves as an Associate Minister at Wesley United Methodist Church in Mt. Vernon, where he helps lead small groups and Bible studies.

After graduating from RLC in May of 2016, Hinds said he will continue his history degree at Southern Illinois University before going into seminary school. He said Dr. Elizabeth Bailey-Smith’s speech class last spring helped him work on the public speaking skills he will be using regularly for the rest of his life.

“Dr. Bailey-Smith asked me to enter into the contest, and initially I said no, but she was very persistent. She supported and encouraged me to enter because she thought I’d do well, and she was right,” said Hinds.

His speech about Compassion International was first given as a part of Dr. Bailey-Smith’s class assignment, but Hinds worked on making it even better before recording it for the contest a few weeks after Spring semester finals.

“Together, we did a couple practice takes. Dr. Bailey-Smith’s collaboration was very, very beneficial for me,” said Hinds. “Communication is essential to anyone, more so for the career I’m going into, and the instruction from Dr. Bailey-Smith is unique. Most instructors talk and provide students with information, but her job is to listen and evaluate your communication skills. She’s shaping each student in every class into better communicators. I give her all the credit for my abilities.”

Dr. Bailey-Smith said it was “easy” to be Hinds’ professor, because he worked hard to take advantage of the course to improve on his skills.

“Jesse is a great student. He really grew as a speaker during the semester,” she said. “Not only did he take it very seriously to improve personally as an orator, but he also encouraged and supported his peers. It is a pleasure to be Jesse’s professor, because he is passionate about his education and wants to get the best experience he can out of everything. He asked questions and always worked to improve his skills to become a better communicator and student.”

Hinds and the other award winners will be featured on Cengage Learning’s website later this summer. To watch their speeches or to learn more about the contest, visit http://solutions.cengage.com/SpeechContest.