INA, Ill. (May 10, 2017) – A generous gift by two of Rend Lake College’s biggest supporters was the highlight of the RLC Foundation’s Jim and Carole Mounier Legacy Society Dinner Friday night in the Student Center. The Mouniers, residents of Rockford, celebrated with RLC Foundation donors and board members, and college administration after the unveiling of a new plaque in the Private Dining Area.

Jim Mounier, a 1972 RLC graduate and current Senior Vice President at Merrill Lynch, was named the RLC Foundation Alumnus of the Year in 2014. Alongside his wife Carole, the Mouniers closely followed the college for a year before deciding to give the largest donation the Foundation has ever received. Totaling a value of seven-figures and growing, the donation was announced by then-Foundation CEO Shawna Bullard at the 2015 Annual Dinner. 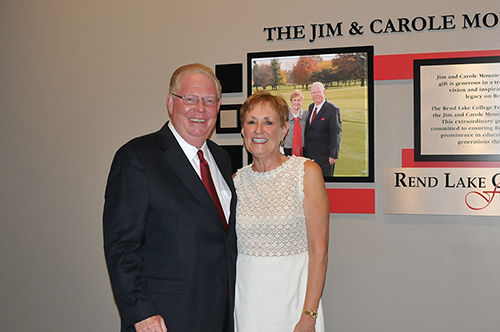 She explained in 2015, “The Jim and Carole Mounier Legacy Society is a bequest of their property to the Foundation. The Mouniers have chosen the Foundation as beneficiaries in their estate, which means when they pass away, the money they've worked for will continue to work for our students through their gift.”

Kay Zibby-Damron, RLC Foundation CEO, started the evening with a word of thanks, not just to the Mouniers, but also to Bullard for her role in the establishment of the Legacy Society.

“Not many have the pleasure and the benefit of working with – not only one – but two of their predecessors, and I’ve been extremely fortunately to have Shawna Bullard and Pat Kern available to me,” said Zibby-Damron. “It was under Shawna’s leadership that the Jim and Carole Mounier Legacy Society came to fruition, so I’m grateful Shawna was able to join us tonight to be part of this special evening. I’ll invite her now to introduce our guests of honor.”

During Bullard’s introduction of the Mouniers, she focused on the inspiration and education the Legacy Society gift will be, not only on future RLC students, but also to locals and graduates who make gifts of their own.

“When we give the gift of education, we fulfill the prophecy of teaching a man to fish. The people in this room and the people on this wall are generous of their time, their talent, and their finances. And they are inspirational,” she said. “What you’re doing is powerful. It’s teaching people and it’s amazing. The people on this wall, they’re changing lives. When I think about the multitude of people that the two of you will change for the better – it baffles me, it astonishes me, it inspires me. You’re giving the gift of inspiration and education.”

“Jim and Carole Mounier are two of the most incredible people I have ever known, and I’m not just saying that because of this name right here,” Bullard continued, alluding to the plaque. “We met a few years ago and we’ve become very close friends, and I would even dare to say family. We connected over a love of golf. Jim has a brilliant mind that is always working. Carole is kind, has exquisite taste, and is sharp as a tack. And they’re both witty and fun and compliment each other perfectly. They have built an empire together and they are each other’s biggest cheerleaders. They make decisions as a team. They challenge us. They make us see things from different viewpoints. They push us. They inspire us to do better, to be better, and to give bigger.”

In addition to giving financially, Bullard also spoke to the giving of education. Through the Mouniers’ donation, the RLC Foundation has received a handful of phone calls and requests from individuals hoping to make similar donations after hearing about the Legacy Society.

“When we started talking through this gift, I stressed over and over again the importance of education, and not just in a community college type of way, but literal education. I told Jim and Carole this would be an eye-opener,” said Bullard. “People would read about it and say, ‘Wow, that’s incredible. Can you imagine if you had a million dollars, would you give it away? What kind of person does that? Wait, I might be able to do that. I sure have worked hard for the money I have. When I pass away, what is going to happen to it? I could leave it to the students at the college that changed my life. Maybe I don’t have a million dollars, but it’s just as important’.”

She continued, “Our best gift is our legacy. In the weeks that followed the announcement of the Legacy Society, we received phone calls from attorneys, CPAs and clients, people who were interested and asking ‘How can I be a part of this? I want to do this. How can I leave my legacy to the students at Rend Lake College?’”

Taking the podium, Jim Mounier immediately had the room in stitches, speaking about his time at RLC, back when there was no lake, and when he’d spend his days playing cards in the South Oasis instead of attending class. Jokes aside, Mounier said his choice to attend RLC over a university at the height of the Vietnam War was one of many great choices that lead him to success.

“Rend Lake turned out to be one of the greatest alternatives,” he said. “Carole and I are huge proponents of community colleges now. We support other colleges, other institutions of higher learning, but I couldn’t be more proud to be doing this. Rend Lake, especially for Southern Illinois, what you’re doing here is absolutely fabulous. Many of you probably already know this, but Rend Lake is one of the best community colleges in the country. To get rated, not only in the state but nationally, you should be very, very proud. And we’re very, very proud to be a supporter.” 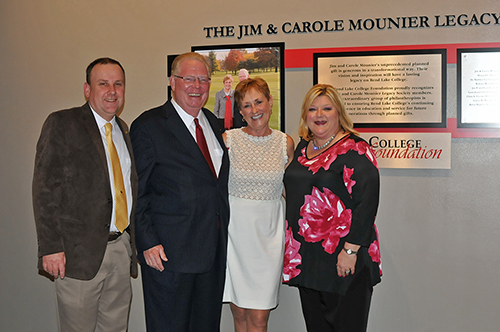 Others in the room expressed their heartfelt thanks to the Mouniers throughout the evening. RLC President Terry Wilkerson thanked them on behalf of the college faculty, staff, administration, and students.

“Tonight gives us a chance to really talk about the importance of giving and what that does for our institution and our students,” said Wilkerson. “We can’t thank you enough for the support and the outpouring we have year after year. It does amazing things for the young people and for this institution. We’re not in the richest part of the state, but sometimes gifts like this and people like you make it so. I appreciate that very much personally.”

RLC Foundation Director J. Nelson Wood, a former classmate of Mounier’s, added, “Jim, you’ve been an inspiration to me. On behalf of the Rend Lake College Foundation, and our board of directors, we want to share our appreciation for what you and Carole are doing, and what you are demonstrating as an example for all of us. There’s nothing like someone taking the lead, and you both are leaders. We appreciate you.”